The cleansing and the pure

I sometimes observe that when you're in your forties, it is frequently impossible to distinguish satire and reality. I had one of those impossible moments last week, watching the morning news on April 23, which is Cervantes' birthday and hence celebrated across Spain as El Día Del Libro, the day of the book. A day of particular interest to those of us in the bookselling profession.

The previous day had been the first in a three-day continuous reading of Don Quijote at the Círculo de Bellas Artas de Madrid. The famous opening sentence was read by Soraya Saénz de Santamaria, the three-year-old who is Vice-President of the Government. Other readers included José Iganacio Wert, the Minister for Education who can be compared to Michael Gove in his politics (though he is neither quite so smart as Gove, nor quite so stupid) and in the degree to which he is loathed by nearly everybody whose lives he affects.

Anyway, not a fortnight before this reading, I heard on the news that book sales in Spain had fallen 20% in three years, the three years being roughly the amount of time which Spain has been suffering from severe austerity and the 20% being roughly the difference between a reasonable living and an unsustainable business. The people in charge of this process include Soraya Saénz de Santamaria and José Iganacio Wert. But there they were, rejoicing in their promotion of a practice, the reading of literature, which they are busy strangling to death. One reaclls not so much Don Quijote as El Cid, sent out into battle when in reality he was already dead. And one struggles unsuccessfully to distinguish reality from satire.

The last book I read was Paul Preston's The Spanish Holocaust, written about the days when Spanish rightwingers tried to kill readers and schoolteachers as well as reading and schools. 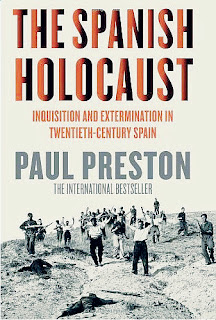 Preston's thesis - and the reason for his title - is that Franco was fighting not just to defeat the Left but to exterminate it. The murders and brutalities of his troops weren't just part of the cycle of retaliation that occurs in any civil war, but a deliberate and premediated attempt to extirpate a whole set of people and their ideas, ideas perceived as Jewish in origin and constituting a conspiracy to weaken and destroy Spain.

As such, Franco's atrocities were not just more extensive but qualitatively different to the atrocities committed by their opponents - to which Preston nevertheless devotes considerable space - which were objected to, restrained and finally all but ended by the authorities, in contrast to the rebel side where it was the authorities that organised them. (Preston also provides numerous examples of rightwing prisoners in Republican areas being saved from potential lynch mobs, a practice much less visible on the other side of the lines.) Whether this was true of the actions of the anarchist columns in Aragón, who often did have a near-exterminist approach to the clergy and the bourgeoisie, is not so clear. But his thesis, as regards Franco's intentions, is surely indisuptable.

Oddly, Preston (p. 5) describes Martov and Dan, who were Mensheviks, as Bolsheviks, and there is a strange passage on (p. 251) which appears to locate Rubielos de Mora to the north of Teruel, which it is not, but if there were other errors, I failed to notice them. His book is not a hard one to read, but it is less a narrative than a succession of masssacres and murders. With good reason, since part of the very purpose of writing such a book is simply to acknowledge the killings that took place, to try and put dates and details and names to them, a process actively impeded by the Spanish government of Wert, Saénz de Santamaria and all.

...the village of of Concud, about two and a half miles from the provincial capital. Here, into a pit six feet wide and 250 feet deep, known as Los Pozos de Caudé, were hurled the hundreds of bodies of men and women, including adolescent boys and girls. Few of them were political militants. Their crime was simply to be considered critical of the military coup, to be related to someone who had fled, to have had a radio or to have read liberal newspapers before the war. Throughout the years of the dictatorship fear prevented anyone from even going near the pit, although occasionally at night bunches of flowers would be left near by. In 1959, without the permission of the relatives of those murdered, a lorryload of human remains was taken to Franco's mausoleum at the Valle de los Caídos. Once the Socialists acheieved power in 1982, people began openly to leave floral tributes. Then in 1983 a local farmer came forward and said that he had kept a notebook with the number of shootings that he heard each night throughout the Spanish Civil War. They totalled 1,005.

There are many thousands of unidentified people buried in mass graves in Spain. Were their names to be recorded and read out at the Círculo de Bellas Artas, it might very well take three days.

Given the exterminist nature of Franco and of the Nazism which it imitated, as well as the deep connection of both these exterminisms with concepts of purity (Franco's extirpation of the Spanish Left was referred to as la limpieza, the cleansing) one might expect a minister of the government not to use terms like "pure Nazism" without prior thought. Alas thought, whether prior or otherwise, appears to be beyond María Dolores De Cospedal, who is herself from La Mancha and whose name I do not much like to remember. Cospedal recently saw fit to use the term to describe los escraches, protests outside the houses of government ministers, often by members and supporters of PAH, the movement against mortgage-related evictions.

Escraches originated in Argentina in the period after the dictatorship, but when those guilty of crimes under the dictatorship enjoyed pardons and immunity: the object was to identify, shame and make uncomfortable those who would otherwise have gone unquestioned, unnoticed and untroubled either by justice or by guilt. To my knowledge not a single person has been hurt in any way in a Spanish escrache: I am not personally fond of them, but they are legal protests and have recently been reaffirmed as such by the courts. But Cospedal, a particularly shameless member of a particularly shameless government, refers to them as pure Nazism.

So, while we are obviously not back in the Thirties - though never even in the Thirties was there unemployment like this - the habit remains: the use by the Spanish Right of the most hysterical and exaggerated language about their political opponents. Spain may have a Bourbon on the throne, but it is not necessarily he who has learned nothing and forgotten nothing.

So, if are referring to the Thirties, and failing to forget, we might remember that Cospedal's party has its origins in Spanish fascism. It also operates a policy of preventing people uncovering and commemorating the exterminist crimes of that very same fascism: rape, torture and murder on a mass scale used as instruments of policy. This is not to be investigated. This is not to be spoken of. But let a peaceful protest occur outside a minister's home, and that is spoken of as "pure Nazism". As I was saying, the difference between satire and reality is impossible to discern.
Posted by ejh at 12:40