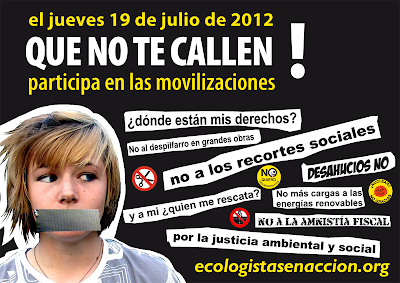 I didn't go to any demonstrations. I've not even seen any of them on the television, since we only have one television in the house and the room where it sits is out of use for a few days. We live four hundred kilometres from Madrid, and nearly thirty from Huesca. I'm a member of Ecologistas en Acción but I've never been to a meeting. My Spanish isn't up to it anyway.

To be honest, if you are forty-seven, you do not go abroad, and live in a tiny village in the country - a village so small that to give its name would be as good as giving your address - if you want to involve yourself in politics any more. Which I don't. I am retired.

But now I am forty-seven, and it is nearly thirty years since all these great causes were happening, and hence almost thirty years since they were entirely and traumatically beaten. And what I mostly think about politics, here in this tiny village with its view of the mountains, is that I would like politics to go away and leave me in peace.

And if we do not, then Northern Euorpe, the financial institutions and the "markets" are going to demand that the economy be smashed into non-existence, in order to save an economy which they themselves helped to explode (and to save a common currency which they do not want to pay, themselves, to save). And when everything is smashed to bits, they will walk away from it, and from us, and blame the smashed-up Spanish for the failure of the course of action on which they themselves insisted.

It will take a whirlwind of protest to stop them. But they have to be stopped.

My age and circumstances are not the same - far from it. But from all the reading I did years ago, I remember this, from a French shipyard worker to Daniel Cohn-Bendit during the events of 1968. Because what they are doing on the streets is what I would be doing if I were young. And what I am doing now is thinking, rather than doing. But thinking like this.


Listen, I'm forty-three, and at that age a worker is too old to learn a new job...but I can remember when I was your age. We wanted to change the world, too. Go on, you lads.